Downsizing or moving towards a simplified lifestyle can require that you shed some of your treasured belongings. It can be difficult to decide what to pass on and to whom. Here are my favorite two examples of a letter providing context and connection to the next generation.

Recently my friend was going though some old boxes that belonged to her mother, who had died the year before. She had returned to Buffalo to help her sisters complete the difficult job of cleaning out their childhood home.  It was comforting that they had each other to lean on during this task.  Little did they know, their mother had left them a wonderful gift among all the old knickknacks, memorabilia and photos.  In a box  containing all the invitations, planning, guest lists, and even receipts from their parents’  wedding, her mother had left a note. It simply said: “Stuff I’ve kept for 40 years + can’t throw out.  –  You can.” 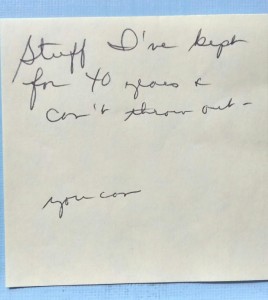 I knew my friend’s mother to be a kind, thoughtful and caring woman and this note confirms her loving nature. She made certain her daughters would be able to let go of that box – GUILT FREE! It was such a simple act, but it’s one that is often overlooked. Too often families agonize over what to keep and what to let go of, wondering what their parents’ wishes might be.

Often when I am helping to downsize a client, they want to avoid making the difficult decision and declare, “The family can do whatever they want with that when I am gone. I don’t care.”.But the process of emptying the home of a departed loved one is stressful and exhausting.  Families are grieving and don’t always have adequate time or emotional energy to sort through everything. Overwhelmed, they usually make one of two choices: Keep everything or toss everything.  Neither of these is the ideal solution; but the alternative requires decision-making. And not everyone is up to making even one extra decision during this time.

A decade ago I was working with an older couple as they prepared to downsize to a smaller home.  After 60+ years in the same house, they were overwhelmed with all that needed to be cleared out. In just about every room we found boxes stuffed with pictures. It quickly became apparent that they would not have time to sort through all of them before they moved. Nor was there space to keep them in their new place.

I know from experience, that boxes of old photos don’t often hold meaning for the next generation, if they don’t recognize the people in the pictures. But I noticed that this couple had wonderful tales to tell with each box they opened. These little time capsules were telling the stories that made up their life together. The one that still stands out to me was his recollection of their wedding day; it was such a loving account. That is what people connect with: the story!

I suggested they both write these recollections down in letters to their children and grandchildren.  Over the next few weeks, we sent off some of the boxes with their corresponding stories:  their wedding day, the cherished family dog, Christmas traditions, and valiant tales from the Blizzard of ’78. It made them happy to impart their life’s stories and the families loved receiving these little slices of history. These letters had such a positive response that I have been suggesting this idea ever since.

So, if you find yourself packing up some old love letters, diaries or other memories from the past, consider leaving a note behind to explain their significance and your intentions. Is it OK to toss these, or is there some great anecdote or meaning that you could impart?  What we leave behind can tell our story, preserve family history or allow peace of mind and closure for family and friends.

One day the manager at my bank approached me for help with a client, a…

Keeping a Connection with a Touchstone

The Internet provides instant access to oceans of information on organizing. You can read advice…

Recent Posts
Save time, money and energy. Start today and make your space work for you!
Get Organized. Contact Me Today!
Copyright ©2019 The FUNctional Home • All Rights Reserved • Site by Holistic Tech
Back To Top
×